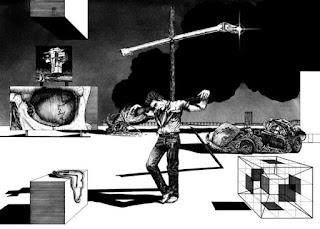 Nagamatzu were the British duo of Andrew Lagowski (SETI, Legion, Terror Against Terror) on synths, guitar, and programming and Stephen Jarvis (Pure Motorised Instinct, Terraform) on synths and bass. Formed in 1982 after messing around with old tape machines and drum boxes, making numerous contributions to international compilations and erratically releasing their own cassettes. Their name comes from a character in JG Ballard‘s “Atrocity Exhibition” and their music reflects his influence. Nagamatzu self-released their debut cassette “Shatter Days” in 1983 after messing around with old tape machines, drum boxes and effects.
“Above This Noise” is a compilation of 9 songs recorded in the period between the release of ‘Sacred Islands of the Mad’ in 1986 and ‘Igniting the Corpse’ in 1991. It gathers tracks which surfaced on some of the international compilation cassette releases that the band were invited to contribute to in the 1980s as well as some previously unreleased songs. The band’s working method was for Andrew to first record a backing track, usually rhythm, sequence, samples. Then both members would layer more electronics, samples, guitar and bass over the top, recording the whole piece in one take. These instrumentals combine stuttering bass, guitar bursts and funeral keyboards draped over a dragging drum machine beat, calling to mind Clock DVA, early New Order or Cocteau Twins. Their sound is full of complex rhythm patterns and dark electronics.