Blogovision 2016,To #17 του @yerasimos:Josefin Öhrn and the Liberation – Mirage 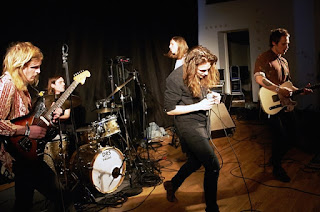 Taking their moniker from the notion of ‘Liberation Upon Hearing In The Between’ from the Tibetan Book Of The Dead. Their second effort Mirage, which follows a mere year after its predecessor, sees the band sculpting sprawling, hypnotic jams into elegant nocturnal serenades with such serendipity that their actual creation remains a little hazy even to themselves. “We agree on not remembering very much about how these tracks came about, that all of them were written on the road and that most of them came fully formed” note the band. “Most were really long to begin with, but we found it relieving to break away a bit from the mandatory psych jams a little bit. We also just realised that none of them were written in daylight, which might be why memory is so elusive.” (thesepsychedelicdays.wordpress.com)


No 17. Josefin Öhrn  and the Liberation – Mirage
No 18. Steve Hauschildt- Strands
No 19. Beach Slang - A Loud Bash of Teenage Feelings
No 20 Body & Full of Hell - One Day You Will Ache Like I Ache
Posted by Avaton Kortez at 12:27