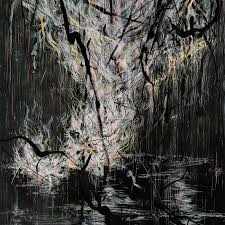 Nothing on Love In Shadow resembles a single in the slightest, nor have any of Sumac’s past compositions. Yet each of the four tracks is a standout in its own way, a piece of heavy art that feels self-contained yet contributes to an even more awe-inspiring whole. The most immediate of these is “Attis’ Blade the track that served as the de facto single by default of being the only pre-release track from the album. It’s also one that the band’s been playing live for a while, having made the setlist of many of the shows during their winter tour with Converge. It’s a tour de force, opening with a galloping rumble that signals this is going to be something intense and remarkable. It balances groove and shriek, noise-rock freakout and haunting, bluesy riffs. And by the end, those riffs echo against a spacious backdrop that serves as a reminder that this music, however torturous the path or however thunderous the roar, does indeed harbor a grace within it. It’s not a kind of beauty that comes easy, but it’s most certainly there to be found for those with the patience to let it reveal itself. (treblezine.com)