Blogovision 2021: Στο No. 4 του Γεράσιμου The Body and BIG|BRAVE - Leaving None But Small Birds 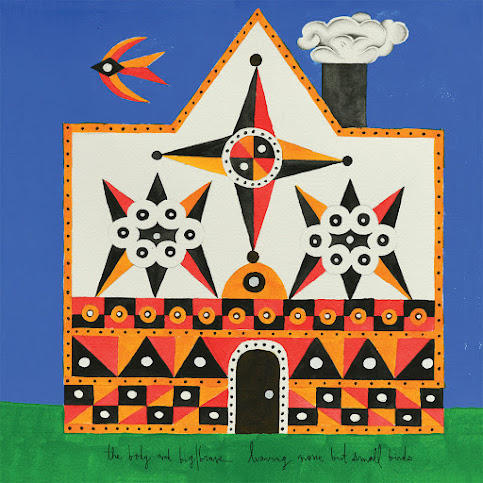 Leaving None But Small Birds transfigures The Body and BIG|BRAVE’s heft into a daring diversity of sounds unbridled and austere. The loping opener “Blackest Crow” implements gusts of violin and harmony against the bedrock of a droning riff and shruti box that subtly shifts timbre. “Hard Times” threads stories of indentured and child factory laborers through cascading trellises of rubato guitar as Wattie’s petitions are swallowed by the swell. The Body and BIG|BRAVE’s maximalist rumble looms at the fringes of each song as guitarist Chip King’s (The Body) staggering drones seep into their fabric with resolute percussion from Buford and BIG|BRAVE drummer Tasy Hudson punctuating with their steady current. Wattie and fellow BIG|BRAVE guitarist Mathieu Ball twirl repeating phrases around one another into restrained meditations that bend and shift incrementally. Hudson joins Wattie in harmonized duets and hockets across the album, enhancing the loneliness of “Once I Had A Sweetheart” and laying bare the raw brilliance of “Black is the Colour.” “Polly Gosford” froths with persistently rising walls of violin, guitar, piano and trudging toms that only capitulate after Wattie spins the tragic song of femicide into ghostly revenge with “She broke him, she tore him / she ripped him in three / because he murdered / her baby and she.”

BIG|BRAVE’s roots as a minimalist folk band and The Body’s love of old-time, country blues, and folk music enable the quintet to strike a formidable balance between sorrowful lamentation and uplifting resolve to weighty effect. Leaving None But Small Birds thatches together two monumental innovative forces that render the emotionally profound with lucid, devastating vitality.